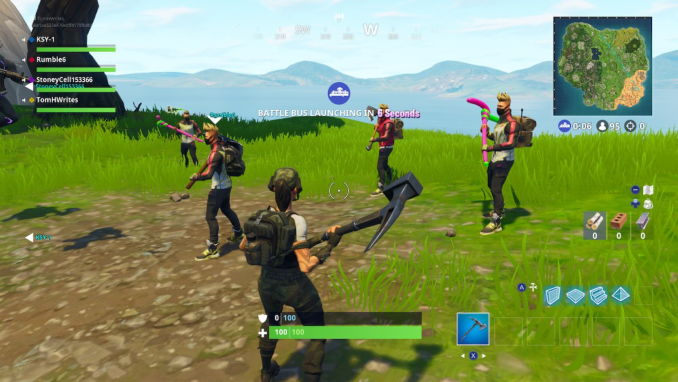 I’ve accrued many, many hours playing Fortnite Battle Royale over the last few weeks, so much so that I decided to indulge in the $10 Battle Pass rather than continuing to play it as a free-to-play experience. It IS an addictive game, I have to admit it. I’ve grown to enjoy the building aspect (even though it’s still sort of ridiculous that as soon as you take a shot at anyone they immediately begin building a house), but I’m STILL annoyed that, like Splatoon and Splatoon 2, too many close-range fights devolve into a hop-and-shoot-out.

It’s impossible to deny: since the days of the N64, Nintendo’s home console hardware has been underpowered when compared to the same-gen contemporaries offered by Sony and Microsoft. There’ve been but a handful of times when this reality has, as a longtime Nintendo enthusiast, bothered me. One of those times was the N64’s inability to run of-the-day RPGs (I will forever wonder what might have been had Final Fantasy VII been an N64 title instead of a PlayStation title), and another was when I foolishly purchased the Wii installment of an annual MLB franchise (holy hell, was that a mistake.)

And now, we have Fortnite. There are no two ways around it: Fornite underperforms on the Nintendo Switch. Nintendo, as a game developer, gets incredible performances out of its own platforms. Likewise, Bethesda has managed to fit Skyrim and Doom into entirely presentable and functional packages on the Switch. Rocket League runs with stripped-down graphics in handheld mode, but the gameplay itself does not suffer. Fortnite for the Switch, though, is a frame-skipping, blurry-edged half-Victory Royale. It’s easily the best mobile version of the game, but it is absolutely the mobile version of the game, and a mobile version of the game that chugs significantly when action gets heavy. As I play I can’t help but be reminded that I’m playing against Xbox and PC gamers who are enjoying a gorgeous, smooth 60 FPS experience, especially when I run into Tilted Towers or one of the game’s other busier areas. I’d have perhaps won that last shotgun duel, I realize, if only my game hadn’t at a key moment dropped down to 15 or 20 FPS, or frozen completely for a full second. Unlike earlier Nintendo home consoles, the Switch’s hybrid nature forgives a lot of sins: does it matter if Doom on the Switch isn’t as pretty as its PS4 cousin when you can play it anywhere? Performance matters, though, especially in online gaming. I play Fortnite with the Switch in the dock and connected online via broadband, and my system still vastly underperforms as compared to Xbox and PC players.

Now, I don’t want to overstate it: Fortnite remains entirely playable on the Switch. The many, many hours I’ve already put into it are a testament to that. Also, in the interest of full disclosure? It doesn’t help that my favorite game mode is 50 v 50, where the entire field of 100 or so players quickly congregate into the center of the storm circle, increasing the likelihood of system performance issues. The fact remains, though, that I avoid landing at Tilted Towers because I know the framerate drop will likely lead to my death, and I have to remind myself not to traverse the landscape too quickly; if through a combination of seamless ramp building and launchpadding I end up Fortnite-parkouring my way across the island, there’s a good chance I’ll start moving faster than the game can fill in its draw distance. And look: I understand that part of my problem might be that I just need to “git gud” at the game. Still, believe me when I tell you that the performance issues of Fortnite on Switch are notable and real.

I will continue to play Fortnite. I will continue to try and “git gud” at it. And the situation is actually improving noticeably as time goes on, thanks to the wonders of always-online consoles and developers constantly patching out bugs and patching in better performance. But here’s something to think about: twice in my life have I been tempted to make a non-Nintendo system my primary home hardware. The first was with PS1, on the strength of FF7 and Metal Gear Solid. The other was in the age of the Wii, when I was saddled with a gimmicky system with a lineup of shovelware and sub-par ports. The Switch is not the N64, and it is not the Wii. It is a tremendous system with a tremendous line-up, and all of Nintendo’s own online offerings work flawlessly. (As does Minecraft and Paladins and other online third-party games, FWIW.)

For the first time this gen, though, I’m wondering if it’s time to invest in a secondary home console. The Switch will always remain my primary; Smash and Metroid Prime are both on their way, after all. But serious or even semi-serious Fortnite Battle Royale play just isn’t possible on Switch. At what point does a powerful portable console become an underpowered home console? If Fortnite on Switch is a significantly less-than experience (and it is), at what hour of gameplay does it become justifiable to invest in a whole other console primarily to play that one game?

Because I’d really like to be able to land at Tilted without feeling like I’m watching a flip book, you know?