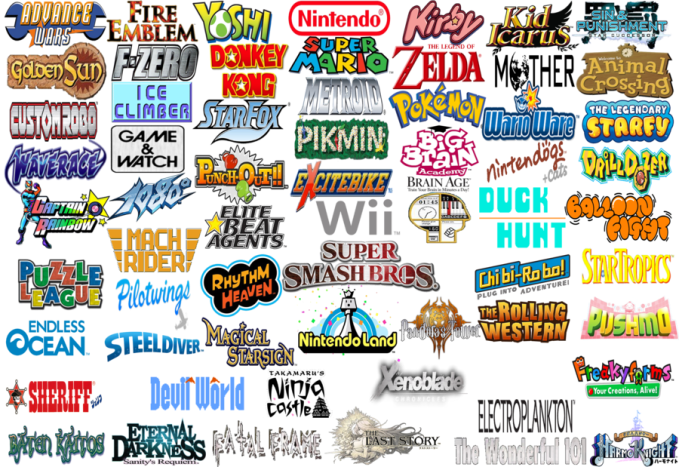 The strength of Nintendo’s various IPs goes up and down like the stock market: a few evergreens remain always-powerful while some former stalwarts plummet and new faces take their place. Every once in awhile I like to survey the landscape and try and figure out where the various players fit on the IP totem pole and now, on the eve of the Switch, it seems like as good a time as any to do that again. In the following list I’ve categorized Nintendo’s franchises from Grade A to Grade F, and within the grades themselves some franchises are given an additional green (+) or red (-). (+) indicates an upward trend for that franchise, while (-) indicates… the opposite. Let’s just say “the opposite”.

Some important notes: that stock market comparison was not an accident. This list is an attempt to gauge the current state of Nintendo’s various franchises, not what they once were or what they might someday become. Also, I didn’t include games that will likely (hopefully) become franchises (Captain Toad) or games that maybe bend too far the rules of what a “franchise” is (Hyrule Warriors, Super Mario Maker). If I excluded a franchise that belongs here let me know in the comments and I’ll let you know why, even if the reason is, “Uh… I forgot about that one.”

(EDIT 11/21/16: I’ve added the Wii brand series, the Remix series, Dillon’s Rolling Western, Mario vs. Donkey Kong/Mini Mario, and the Pokemon spin-off games. I’ve upgraded and edited the commentary on the Wario brand of games, and I’ve added an extra line of commentary on Brain Age.)

Zelda and Mario have been here since the beginning, of course, and the Pokemon franchise only strengthened its legendary status with this summer’s smash hit Pokemon Go! Meanwhile, Super Smash Bros. and Mario Kart, two franchises that seemed ridiculous when initially birthed, have become stalwart brands, two of the biggest releases of any Nintendo console’s life cycle. The real surprise might be Splatoon‘s placement up this high in the food chain after only one release under the franchise banner. It was a legitimate phenomenon, though, particularly in Japan, and the place of prominence given to it in the Switch reveal trailer shows how much faith Nintendo has in this new IP. We’ll see in the coming year if Splatoon can stay hot, but all signs point to the ink-based shooter franchise quickly earning evergreen Grade A status.

Nintendo does love themselves some Animal Crossing and Fire Emblem, two franchises that would have been Grade B on merit alone but receive the upwardly mobile B+ moniker because of their place in Nintendo’s mobile gaming strategy. Donkey Kong, Kirby, and Yoshi are stalwarts of the B*Team, of course, and Paper Mario and Mario & Luigi usually are… but recent entries for both franchises have failed to live up to the standards set by earlier generation predecessors, and one or two more “just okay” showings could easily knock either property down a grade. Nintendo can’t well afford that, truthfully, because further down the list some Grade B regulars have seen their stock plummet thanks to dismal recent outings.

It’s here in the third tier where Nintendo needs to be careful. Too many Grade C averages have dropped recently, leaving the company woefully unfortified after they run out of A and B franchise games to deliver. I’m even being overly generous here, calling Tomodachi Life a “franchise” largely because it’s an extension of the Mii brand (and arguably part of the same “series” as Miitomo, Nintendo’s social networking mobile app.) Luigi’s Mansion has some surprising juice after a very well-received 3DS outing, and as for Pikmin… well, Nintendo really wants us all to love Pikmin as much as they love Pikmin, but if series sales are any indication it doesn’t seem like we do. The next Pikmin will eschew the overhead RTS elements for a more action-oriented 2D perspective. If Pikmin: The Side Scroller doesn’t hit the mark, it’s easy to see that series spiraling into a freefall. Finally, the Pokemon spin-off titles have the benefit of the Pokemon brand going for them, but are often less than impressive. For every Pokemon Snap or Pokken Tournament, there are about ten Pokemon Mystery Dungeons.

Given Kid Icarus‘ pedigree (early NES pillar, cartoon immortalization, Smash-brawler status) you might think there have been more than three games in the franchise, but you’d be wrong. The three “P”‘s of puzzle games (Picross, Pushmo, and Puzzle League) are easy to make and sell cheap. They’ll never carry a sales month but there’ll be more of them. While Mario Party: Star Rush was recently DOA (critically speaking), the upcoming Mario Sports Superstars looks like an early winner and could revitalize the closest thing Nintendo has to a sports brand. Punch-Out!! and Rhythm Heaven have the benefit of being fan favorites even though new games in each series are few and far between, and while high hopes were had for the Xenoblade Chronicles series developing into a legitimate RPG franchise (it still might) the Wii U’s Xenoblade Chronicles X just didn’t move the needle as much as it needed to. The Wario brand is a strange one: different titles in all different styles of gameplay, from platforming to mini-games to microgames. It’s a safe bet there’s another Wario game is in our future, but there’s no telling what sort of game it will be (and a good chance it’ll be for mobile devices.) Mario vs. Donkey Kong, a franchise that seems to multiply like lemmings, is prolific and steady but just sort of… there. Finally, we reach Metroid. Hoo-boy. There isn’t a more criminally mishandled franchise in Nintendo’s stable over the past few years than Metroid. A once-upon-a-time Grade A stalwart, Metroid would leap back up into at least Grade B with just one great new Prime or Super or Fusion or Zero Mission. But Samus is reeling from the back-to-back body blows of Other M and Federation Force, and though her fans are loyal one more stinker could kill the franchise for a good long while.

The big news here is Star Fox. Star Fox Zero was a disaster in both sales and reception, and arguably the last great new Star Fox game came way back on the Nintendo 64. I’m betting we won’t be seeing Fox and friends for quite some time. Nintendogs and Pilotwings are two generally liked brands that could always be percolating, ready to hop up a grade with one solid new release, but the golden trio of Advance Wars, F-Zero, and Mother are so beloved, it seems impossible they’ll ever drop lower than Grade E no matter how long Nintendo waits to revisit their worlds. As for the Remix series, it really looked like that was going to become a longterm thing, but instead of following up the NES Remix games with the logical SNES Remix, Nintendo just sort of… stopped.

A tale of two games: at E3 2014, Nintendo announced two new IPs, Codename S.T.E.A.M. and Splatoon. While Splatoon looks like a major pillar of the company’s strategy going forward, we’ve probably already seen the epic conclusion of the Codename S.T.E.A.M. “franchise”. Not even an exclusive amiibo pack-in could save the last (take that as you will) Chibi-Robo game. There is zero buzz coming from either Nintendo or their fans for the Brain Age, Custom Robo, Dillon’s Rolling Western, Excite, Golden Sun, Legendary Starfy, or Sin & Punishment franchises (although Brain Age in particular seems like a natural to make the jump to mobile), which is not necessarily the case with Dr. Mario (which will always be a candidate for revival cuz Mario), Wave Race (beloved by fans and rumored to be making its way to the Switch), and StarTropics (which didn’t need to be included on the NES Classic, but was!) Finally, there’s the conundrum of the Wii series of games: Wii Sports is an all-time classic title that could return conceivably as Switch Sports, but Nintendo is done with the Wii brand, including the Wii branded games. I don’t think we’ll see a new Wii Play or Wii Fit anytime soon.

That’s it. That’s my rundown. My takeaway here comes out of that third tier, Grade C. If Nintendo can’t rebuild that tier of games to a place of consistently quality software and get brands like Mario Party, Kid Icarus, or Punch-Out!! up there, they are going to have to work long and hard to re-kindle their third-party relationships and hope to fill out the Grade C stable of Switch games from outside developers. I mean, it would be nice if everything they developed could be graded “A”, but the reality is this: not every game can be The Legend of Zelda. (Even though Metroid pretty much should be.)

2 thoughts on “Making the Grade”